So, how do I use this thing?

The service ichi.moe provides is obviously not for the people who already know Japanese. However if you're just starting to learn, or don't know any Japanese, the word definitions it outputs might seem to make no sense at all. This tutorial will get you up to speed, while also explaining various features of ichi.moe.

Suppose you found some Japanese text that you'd like to understand. It is recommended that you input it in small chunks to prevent sensory overload. Locate a sentence within this text (they are usually separated by the symbol "。") and copy paste it into ichi.moe, then press "Submit". You might see something like: 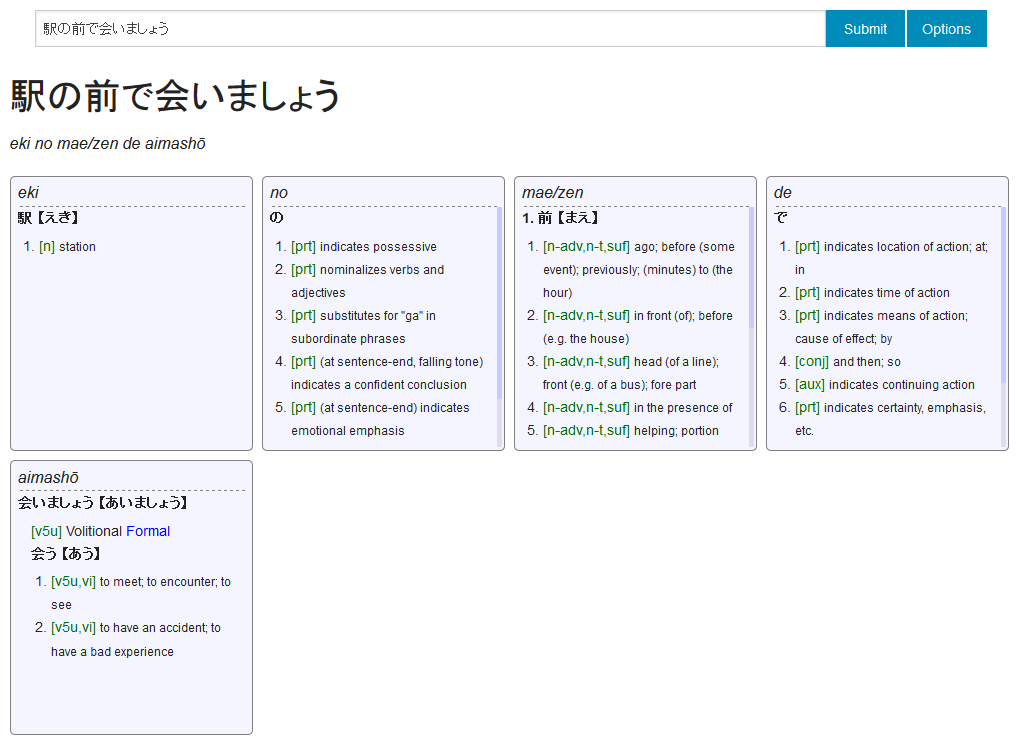 Let's go over the parts of this result:

This shows the original sentence and its romanization. You can choose the romanization method by clicking "Options" and selecting your preferred method (it will be chosen by default in the future). You can hover over the romanized word to see which part of the original sentence it corresponds to. You can also click on a word to jump to its definition (useful in mobile layout).

These cards display definitions of the words in the sentence. They are scrollable if the definition is too long. This particular kanji can in fact be read in two ways, "mae" or "zen", with the correct meaning derived from context. Parts of speech are denoted in brackets. The abbreviations are a bit cryptic, but "n-*" are nouns, "v*" are verbs and "adj-*" are adjectives. There is a tooltip when you hover. Full part of speech list can be found at JMDict.

For single kanji there's a link to Wiktionary ("[w]" in top right) to help find various possible readings of this kanji. This might also help if ichi.moe isn't able to match any word to a certain kanji.

Some words are conjugations of existing words, like "aimashō" above. In that case, a type of conjugation is displayed, followed by the root word and its definition.

Some words are compound words that consist of a primary word and one or several suffixes that affect its meaning.

Japanese is (mostly) a Subject-Object-Verb language, which means these parts of the sentence usually appear in this order. In particular, the primary verb is at the very end of the sentence, optionally followed by one or several particles indicating the "tone" of the sentence. Other parts of the sentence are indicated by special particles that follow the word they're attached to. They often play the role of prepositions in English, except they are located after the word, not before it. For this reason Japanese sentences are often easier to understand by reading the definitions backwards.

Our example sentence doesn't seem to have a subject (which is often omitted in Japanese and deduced from context). However the main verb is easily identifiable, "aimashō". It is in "volitional" conjugation, which means it's similar to English "let's ..." (you can usually Google for "(conjugation name) japanese" and find an explanation of what it does). So, using the first definition of the word we get "Let's meet...". It is preceded by a particle "de", which indicates location. "de" is preceded by "mae/zen" which has a lot of definitions... However that itself is preceded by "eki no", which means "of station" or "station's", so the second definition of "mae" ("in front of") makes the most sense. So, the sentence means "Let's meet in front of the station".

Let's try another sentence, あなたの質問は答えにくい. It's segmented as "anata no shitsumon wa kotaenikui". The word kotaenikui is a compound word with the suffix "nikui" which means "difficult to", and the whole word means "difficult to answer". This sentence actually has a subject, or, more correctly, a topic, indicated by the particle "wa". "wa" is preceded by "anata no shitsumon" which means "question of you" or "your question". The entire sentence, therefore translates to "your question is difficult to answer".

Of course, many sentences in the wild are more difficult than these textbook ones, but the basic principle is the same. It's worth to read at least an introduction of Japanese grammar to have a basic understanding of how Japanese sentences are structured.